In October, I had the pleasure of performing a marriage ceremony in Bar Harbor, Maine.  It was a day to remember and I’m pleased to be able to share the details.

The couple:  Rosie and Rosemary 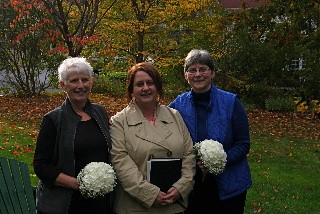 The plan:  Marry atop Cadillac Mountain during their annual Maine vacation

The details:  Classical harpist to play before, during and after ceremony

Rosie and Rosemary planned to marry at the summit of Cadillac Mountain in Acadia National Park when the federal government shutdown forced the park to close just a little more than 3 weeks before the wedding.  Any hope of sneaking in was limited by the news that police were issuing citations for such misbehavior.  Molly Nichols, a classical harpist had been booked to play during the ceremony.  Plans to hold the ceremony at the Graycote Inn were made in case inclement weather on the mountain risked damage to the harp.  Just a few days before the ceremony, the shutdown ended and the park reopened.  Yahoooo!!!  The weather was clear, even sunny, during my drive to Bar Harbor.  Skies began to turn gray as I entered the park.  By the time I was three quarters of the way up Cadillac Mountain, the wind had picked up and rain began to fall.  I chalked it up to a “passing shower”.  When Molly arrived, the decision to have the ceremony at the Graycote was finalized.  So we traveled back down the mountain and picked a spot on the lawn to hold the ceremony.  Adirondack chairs rearranged in a half circle, the harp set up, and we were ready.

There is something to be said for a couple who truly just wants to be married.  Nothing more, nothing less.  Rosie and Rosemary were this sort of couple.  They and their guests took the last minute change of plans in stride. 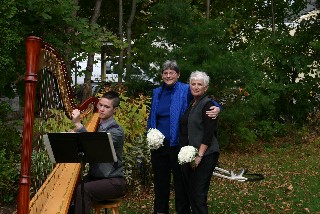 I ran to the town office to deliver the license and then met back up with the group at Galyn’s in Bar Harbor for dinner.  What transpired there was just too much fun not to blog about.

Molly set up her harp in a function room located toward the rear of the restaurant.  A just-right sized room with an intimate feel.  Not far from other patrons but somehow perfectly separated.  Hors d’oeuvres of shrimp cocktail, crab cakes, seafood stuffed mushrooms and the best bacon wrapped scallops I’ve ever had were laid out.  Noticed a seafood theme, didn’t you?  Well, that’s because Rosemary and Rosie are from Georgia.  Their guests were from as far away as New Mexico.  When it came time for dinner, they all ordered seafood.  But Molly and I (the only Mainah’s in the group) ordered prime rib….A fact pointed out before dinner was over.  HaHaHa – We do have a tendency to take our seafood for granted up here.

Galyn’s also served us some memorable sparkling wine, which I took note of and have looked for, but can’t seem to find on the grocery store shelves (hmmm….go figure).

The company Rosie and Rosemary keep is colorful (that could be the understatement of the year).  I did forewarn Molly about sitting next to Rosie’s brother David (who you can just tell is T-R-O-U-B-L-E), but she did it anyway.  And it turns out Molly is not just an amazing harpist, but she is a remarkable entertainer in general.  I don’t think anyone will soon forget her impression of the Maine accent.  After dessert, we discovered that the multi-talented Molly also sings fabulously.  There was somewhat of a sing-a-long when Molly began playing requests for Phantom of the Opera tunes to end the evening.  My stomach finally stopped hurting from all the laughing we had done at just about the time I got home (two and a half hours later).  I don’t believe anyone in the group wanted to see the evening come to a close.

To Rosie and Rosemary:  Congratulations and thank you, thank you, thank you!!!!  I cannot remember the last time I had as much fun.  When you are ready to renew your vows, be sure to call (assuming Rosemary can find her phone!!!)          😉

If you are planning a destination wedding in Bar Harbor or Acadia National Park, please call or e-mail me to reserve your date. 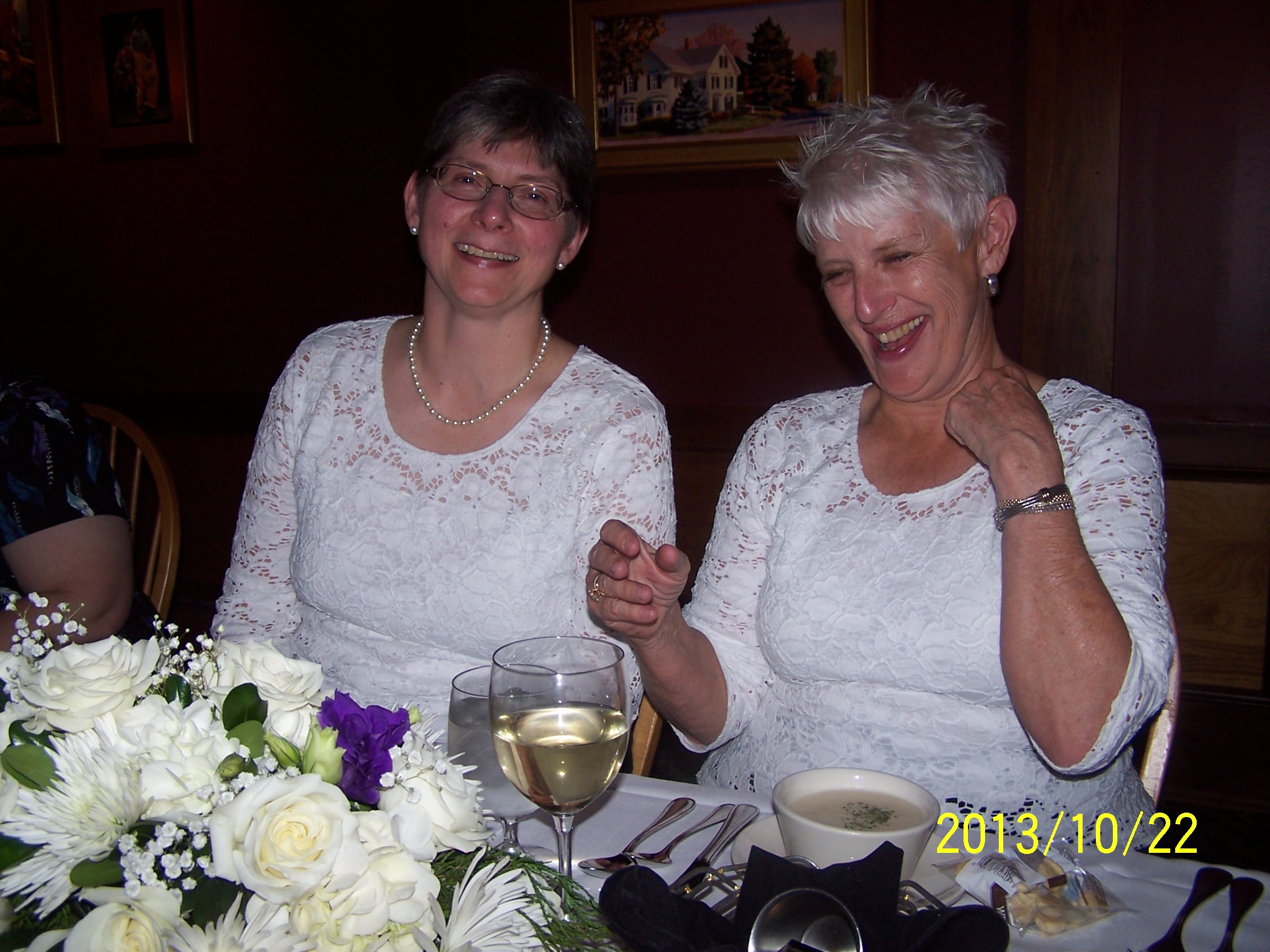 On April 14th, I married Shelly and Belinda in a semi-casual ceremony at the home of Shelly’s parents.  Though it is not wedding related, I have to say that I was incredibly impressed with Shelly’s parents.  Together, they built custom kitchen cabinetry out of wood cut on their own land. Shelly’s mom designed and Shelly’s dad crafted.  Gorgeous, functional and amazing…Much like their marriage.  Without a doubt, the commitment they display has trickled down to their children. 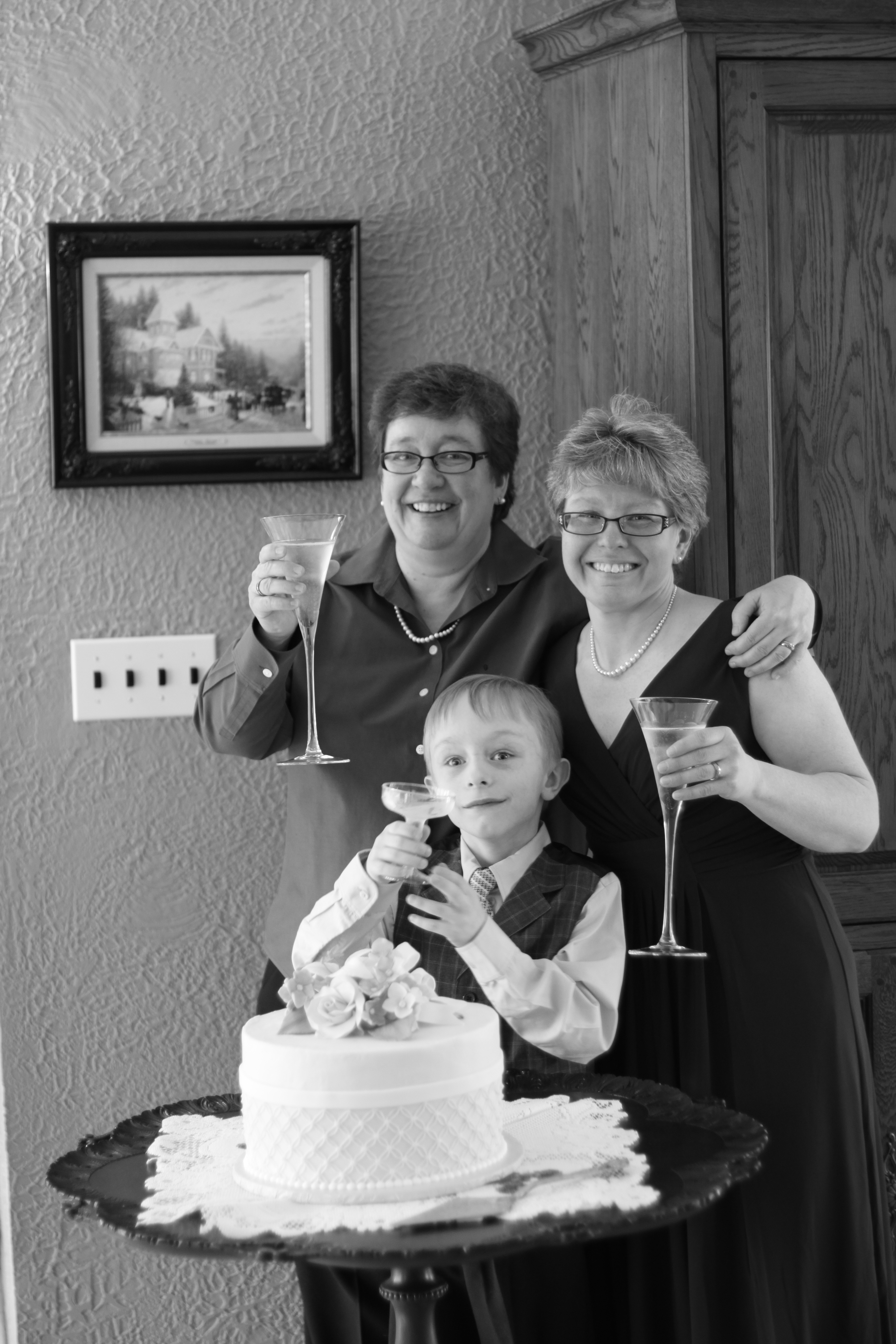 Now, I always enjoy the pleasure of sipping wine and champagne.  Okay, so I wasn’t really sipping.  Whatever!  It’s a wedding!  Eating strawberries, whipped cream and to-die-for cake are a few of my favorite things as well.

But best of all…Getting to hang out a bit with the brides and their family and friends.  What a crew.  They’re warm, loving, tolerant, accepting, full of zest, multi-talented (from keyboards to cabinets, they have it covered) , and they put fun right up their at the top of their priority list.  Now those are my kind of people! 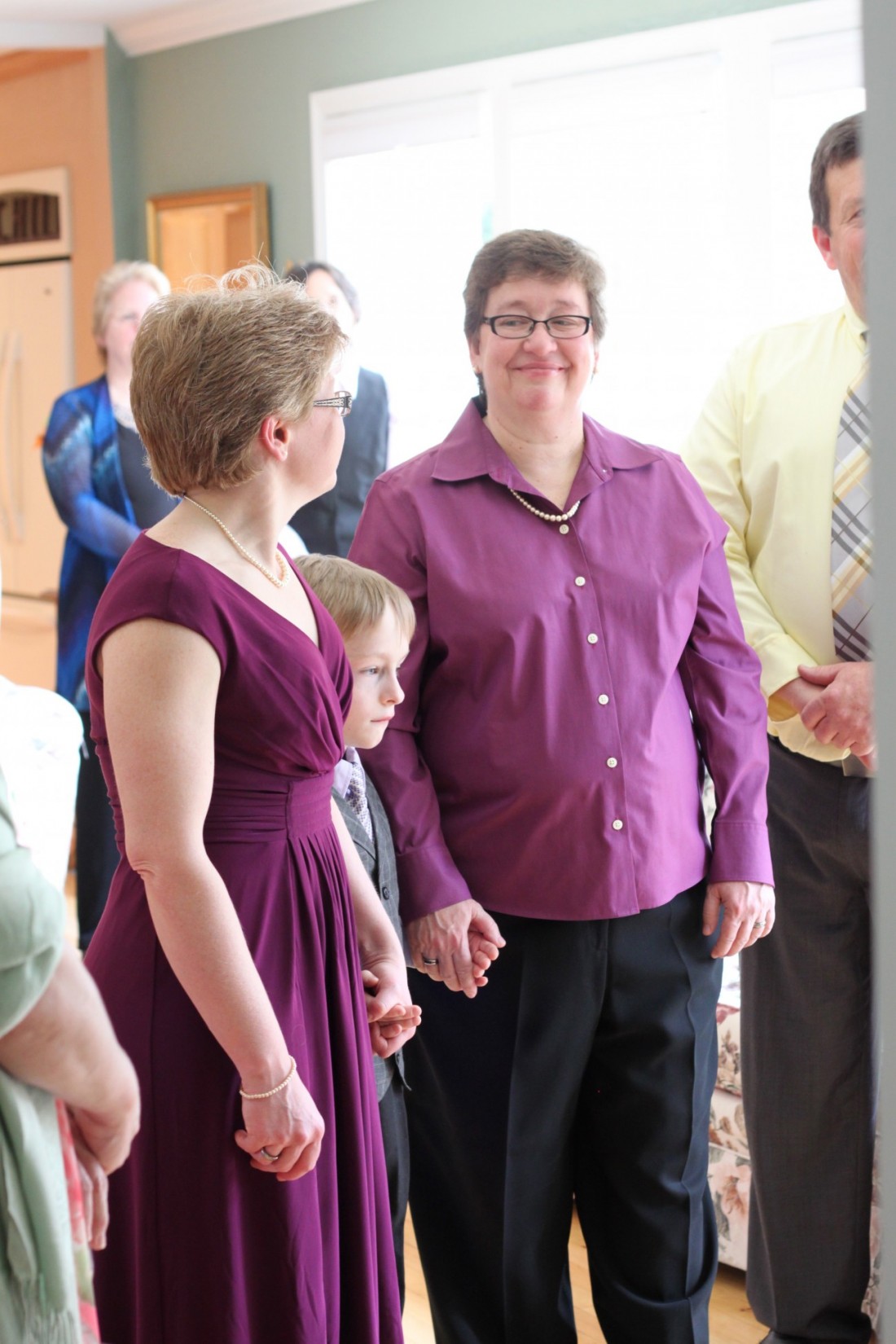 When I arrived, I was almost overwhelmed at the positive energy within this group.  They tease each other warmly, show affection without reservation and laugh without hesitation.

Cameron had made it clear that the three of them were getting married right from the get-go when they filed their marriage intentions.  So we incorporated a vow from Shelly and Belinda to Cameron to honor his place in their family.  Cameron himself was given the honor of pronouncing them all as a family at the end of the ceremony, a job he carried out flawlessly. 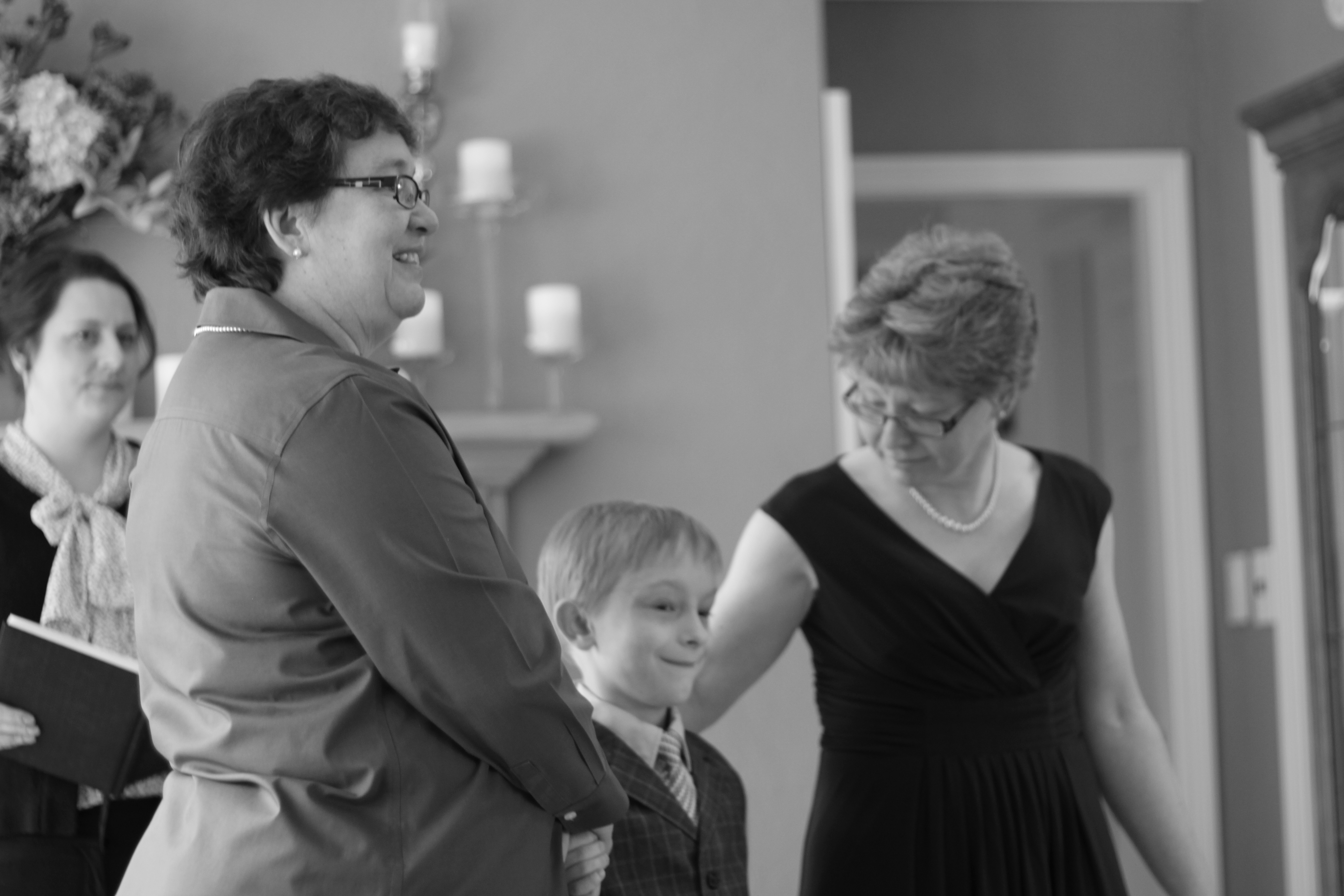 The joy over this marriage didn’t end there.  All of those present were clearly elated to be gathered for such a special occasion.  Shelly sent me a few photos and the moment I opened the one of the entire group, I again felt that same positive energy just oozing from the photo.  I am loving the big smiles all around…Evidence of a truly happy moment.

During a toast to the newlyweds, Shelly’s mother expressed a simple wish: Peace and harmony.

Congratulations to Shelly, Belinda, Cam and the rest of the group.  Thank you so much for allowing me to be part of such a fun filled afternoon! 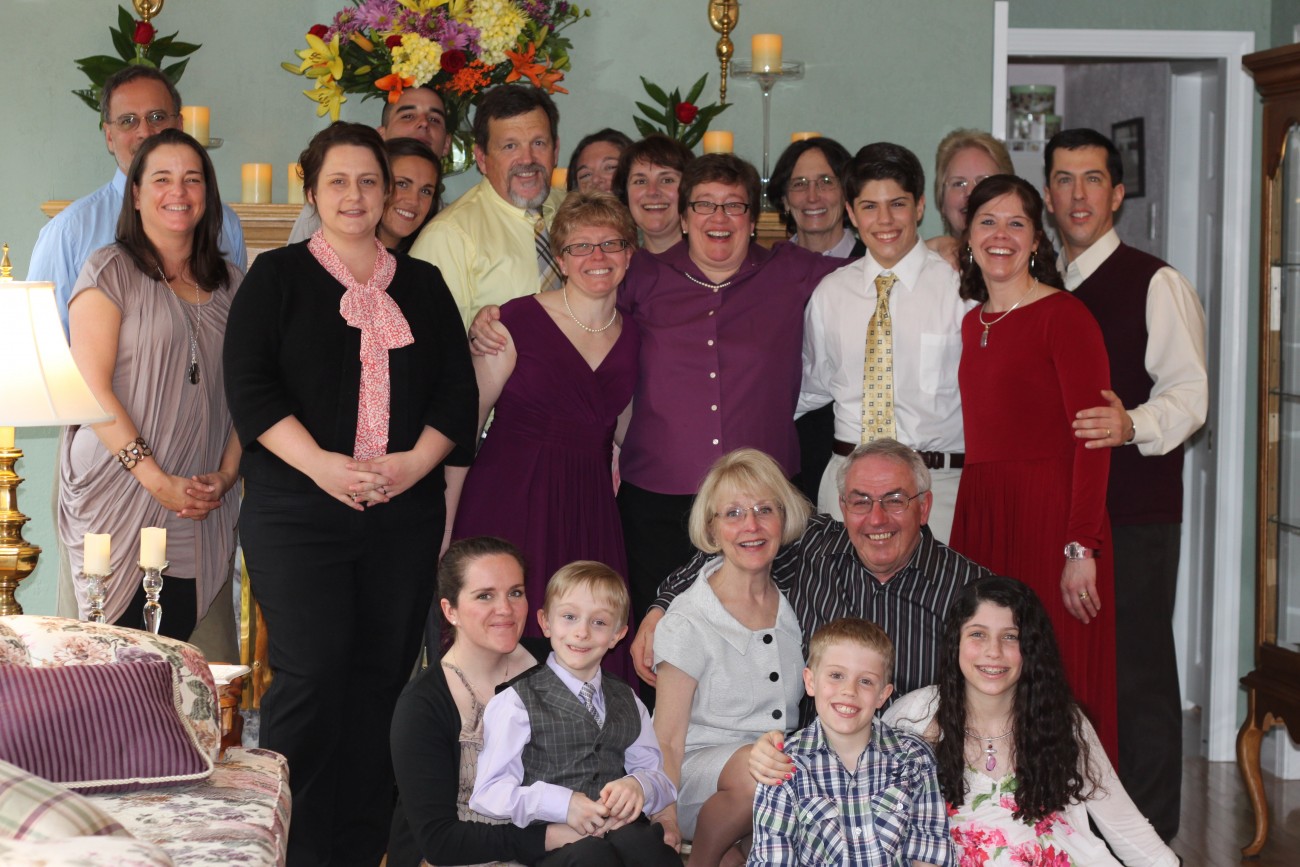 In an earlier post, I committed to performing the first Maine same sex marriage booked at no charge.  Needless to say, I was delighted when the subject of rates came up last night during a phone conversation and I was able to advise Melissa and Kristin that their ceremony was complimentary as they were the first couple to book.

Melissa must have thought only the ceremony was complimentary, as she asked what the mileage charge would be.  I told her mileage was also complimentary and then she asked whether I would need overnight accommodations.  I think she might have been a bit skeptical by the time I told her no overnight was needed either.  Free is free ladies!

So…Melissa and Kristin are planning a small and relaxed ceremony on the coast of Rockport on July 27th of 2013.  And they are traveling all the way from Forth Worth, Texas.  They decided a December 29th wedding was not necessary and they could wait until July when it was warmer.  As I sit here wearing three layers of clothing with my space heater turned up on high, I fully understand their reasoning.

Be sure to check back in July for updates and details on their ceremony.  Perhaps they will even pose for a photo to add to the blog.  🙂

Congrats to Melissa and Kristin!  I am looking forward to meeting you both and crossing fingers for the best weather that Maine has to offer on your day!

A date is set for Maine same sex marriage!

Town offices are able to issue Maine same sex marriage licenses as of December 29, 2012.  Because the 29th falls on a Saturday, some municipalities are generously opening their doors specifically to issue marriage licenses for couples who wish to file their intentions on the very first day.  So far, I am aware of some town offices planning to open from 9am to noon and others who plan to open at midnight.  Please call your town/city clerk to inquire about special hours for this occassion.

Be sure to bring the following items with you when filing your intentions: